Croatia, as the only country in the world which is central European, Danubian and Mediterranean at the same time, with its unique geographical location connects Europe to the world. Modern transport and energy infrastructure, untarnished soil, unpolluted sea and rich sources of fresh water provide the foundations for Croatia to build its future on and further develop in the European and world markets.
Unique geographical location, modern infrastructure, political and economic stability, competent and highly educated workforce are only some of the reasons to invest in Croatia.
Croatia offers the following to investors: Easy access to European and world markets, modern transport infrastructure, reliable investment and business environment, stimulating investment climate, highly educated, multilingual and competent workforce, high quality of life.
Situated in the heart of Europe, only two or three hours flight distance to any European destination, Croatia, with its highly developed road and railway network, and the network of seaports, inland ports and airports, as well as inland waterways and intermodal terminals, represents the central link between Europe and the world. The network of modern motorways, placing Croatia together with leading European countries, provides a possibility of fast and uninterrupted travel. International transport corridors pass through Croatia, the country is 100% digitized, with its entire territory covered by broadband Internet. Its highly developed gas distribution network places it at the very top of European countries. All of this makes Croatia an ideal transport, communication and energy intermediary, not only among countries in the region, but between the Mediterranean and the rest of the world.
The Republic of Croatia has been a full member of the European Union since 1st July 2013, with all the rights and obligations arising from said membership. With the EU membership, Croatia became part of a single internal market and a customs union. The internal market is characterized by the free movement of goods, services, capital and labour, and a common trade policy and agricultural policy. In the European Single Market, which is made up of 27 Member States, goods, services, capital and people can move freely, as within a single country, without obstacles represented by state borders. The Customs Union is characterized by common customs regulations and free trade between the EU Member States.

MOTIVE NO.   5: INSTRUMENTS FOR PROTECTION OF FOREIGN INVESTMENTS

MOTIVE NO.   8: AGREEMENTS ON THE PROMOTION AND MUTUAL PROTECTION OF INVESTMENTS

For a business conducted between two economic operators on a single EU market to be based on free movement of goods and services, trade is conducted without customs formalities, i.e. without carrying out customs supervision of the goods and collecting customs charges.

Commodity exchanges between EU Member States and third countries are subject to common EU customs legislation, binding on all Member States, and the Common Customs Tariff. Regulation (EU) No. 952/2013 of the European Parliament and of the Council of 9th October 2013 laying down the Union Customs Code is the basic rule of EU customs policy under which legal entities and natural persons should act when importing goods from third countries or when goods are exported to third countries and who, when and how pays export or import duties and other charges.

In its entire territory, Croatia has over 100 ready entrepreneurial zones owned by municipalities or towns, with utility services, clear ownership and good logistic and traffic connections (access to motorways, railway, ports, etc.). In addition to strong support from local communities, the possibility of additional tax reliefs (for example, relief from utility tax, lower payments for municipal services for zone users, lower land prices, depending on its size, etc.) exists for business activities within entrepreneurial zones.

New vacancies have to be filled within 3 years after the start of investment.
Minimal period for maintaining investment project:

MOTIVE NO. 5: INSTRUMENTS FOR PROTECTION OF FOREIGN INVESTMENTS

The Republic of Croatia guarantees by law the same rights to foreign investors as it does to domestic investors and ensures free transfer of return on equity from the country upon completion of investment.

A foreign investor has the same rights, obligations and legal position in a company, subject to reciprocity, as a Croatian citizen or company. The Constitution of the Republic of Croatia establishes that the rights acquired by investing capital shall not be diminished by law or other legal acts and ensures free extraction of profit and invested capital from the country upon completion of investment.

As the Republic of Croatia is a full member of the EU, within the framework of the Common Trade Policy, the trade relations of the EU member states with third countries are regulated by trade agreements.

By joining the EU, the possibilities of preferential exports and imports have increased significantly with regard to free trade agreements that the EU has concluded or will enter into with third countries. Imports of good of non-preferential origin from third countries shall be subject to the Common Customs Tariff of the EU.

An overview of all concluded trade agreements, the status of the agreements being negotiated and a possible search for EU trade relations with third countries and regions is available at the website of the European Commission.

An overview of the status of the agreements being negotiated is available at the web site of the European Council.

MOTIVE NO. 8: AGREEMENTS ON THE PROMOTION AND MUTUAL PROTECTION OF INVESTMENTS

The EU's General Customs Preference System (GSP) is a system by which the European Union unilaterally grants trade preferences to developing countries and the least developed countries:

MOTIVE NO.10: ACQUISITION OF REAL ESTATE IN CROATIA FROM FOREIGN CITIZENS

Legal entities established and registered in Croatia, regardless of whether domestic or foreign capital has been invested in them, are considered to be domestic legal entities and have the right to acquire ownership of real property. A foreign natural or legal person may acquire the right of ownership of real property, in line with the principle of reciprocity and the consent of the Ministry of Justice, according to the Act on Ownership and Other Real Rights, with the exception of citizens and legal entities from EU Member States for which there are no such restrictions. 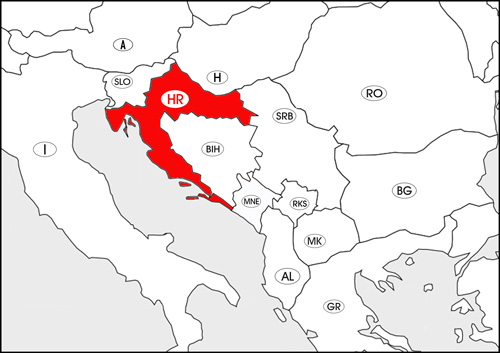