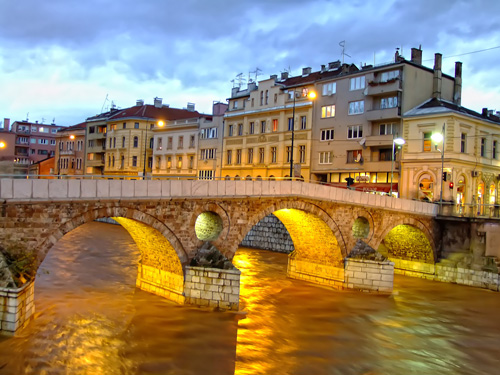 From the point of view of foreign investors, Bosnia and Herzegovina is an attractive location for investment. Geographical position as a link between the European Union and the countries of Southeast Europe, relatively low labor costs, developed industrial culture and BiH loyalty to the European Union are just some of the reasons why investors choose Bosnia and Herzegovina. The proximity of the European market is one of the key reasons for the entry of investors (low transport costs) and BiH is connected to the European Union through its longest border with the Republic of Croatia, which allows direct trade.
There is also the Central European Free Trade Agreement (CEFTA) with six other Western Balkan countries, and it is suitable for free trade. Furthermore, the reason to invest in BiH is the relatively low labour costs compared to other countries in Central and Southeast Europe, as well as low operating costs (operating costs: electricity, water and other utilities), and then BiH still has much lower tax rates compared to other European countries.

MOTIVE NO.  7: AGREMENTS ON AVOIDANCE OF DOUBLE TAXATION

MOTIVE NO.  9: AGREMENTS ON PROMOTION AND PROTECTION OF INVETSMENT

Equipment of the foreign investor being imported as part of share capital is exempt from paying customs duties (with the exception of passenger vehicles, slot and gambling machines).

From the payment of import duties are exempted, on the production assets and other equipment belonging to the company which definitively ceases activity in another country and transfers to the customs territory of Bosnia and Herzegovina in order to carry out similar activities.

If the company that is moving is the farm, the animals on it are also exempted from import duties on importation.

In order to enjoy the benefit for foreign investor, he should submit a written request for exemption from paying import duties to the competent customs authority (according to the place of seat of the company) along with the following documents:

• contract or other relevant document about the investment on the basis of which the equipment is being imported,
• proof of registration of the investment at the competent authority,
• specification of equipment with tariff number, tariff mark (with quantity indication), single and total value, certified by the investor,
• statement of the investor that the equipment is not older than 10 years age limit,
• Certificate of the competent institution confirming that the imported equipment complies with the environmental and employment protection standards.

Free trade zones in BIH are part of the customs territory of BiH and have status of legal entity. According to the Law on Free Trade Zones of BIH, free trade zone founders may be one or more domestic and foreign legal entities or natural persons. The free zone establishment is considered economically justified if the submitted feasibility study and other evidence can prove that the value of goods exported from a free zone will exceed at least 50% of the total value of manufactured goods leaving the free zone within the period of 12 months. Currently there are four operative free trade zones in BiH.

In Federation of BIH:

In Republic of Srpska:

A taxpayer who invests in property, plant and equipment in the territory of the Republic of Srpska for performance of a registered manufacturing activity, shall be entitled to a tax base reduction by the value of the investment

The Register of Incentives in Republic of Srpska:

Additional incentives depend of entity and in Federation of BiH of cantons and municipality: hence, employment incentives apply, incentives for tourism sector, environment etc.

Foreign investments have same status as domestic and they enjoy the same legal and judicial protection as domestic.

Foreign investors concerned about risks of transfer restrictions, expropriation, war and civil disturbances and denial of justice, can be insured against these risks with the European Union Investment Guarantee Trust Fund for Bosnia and Herzegovina, administered by the Multilateral Investment Guarantee Agency (MIGA, member of the World Bank Group).

MOTIVE NO. 7: AGREMENTS ON AVOIDANCE OF DOUBLE TAXATION

BiH has also signed a Free Trade Agreement with Turkey which provides additional free access to this consumer market with 70 million people.

EFTA: Free Trade Agreement between Bosnia and Herzegovina and EFTA (Switzerland, Norway, Iceland and Liechtenstein) was signed on 24 June 2013 in Norway, and entered into force on January 2015.

MOTIVE NO. 9: AGREMENTS ON PROMOTION AND PROTECTION OF INVETSMENT

Bosnia and Herzegovina has Agreements on Promotion and Protection of Investments with the following countries:

Reputable companies with foreign capital are already operating in BiH very successfully, such as Coca Cola, Argeta, HeidelbergCement, MANN + HUMMEL, Delloite, etc., which shows that there is a climate in BiH that is conducive to success stories.

Success stories of foreign investors confirm that Bosnia and Herzegovina is favourable destination for foreign investment, and that we could be optimistic concerning the FDI inflows in the coming period. The expectation that FDI levels will be increased in Bosnia and Herzegovina, were based on on-going projects, the investment opportunities, intention of privatization many strategic companies and interest of foreign investors for potential projects. Based on data published in the Global Situation Trends Facts & Figures report in 2019, Bosnia & Herzegovina is the number 6 country globally in jobs created per 1 million inhabitants and on position 3 for export driven investment.

Unfortunately, pandemia COVID is reflecting on FDI in the world and in BiH but we expect it will change soon According to the FDI Stock by countries the largest share refers to Austria (1.4 billion EUR), Croatia (1.2 billion EUR), Serbia (1.0 billion EUR) and Slovenia (554 million EUR). In last few years’ increasement is noted of FDI from Russian Federation and from Middle East but still fist ten positions belong to European countries.

Foreign investors have the same property rights over real estate as bh. legal entities, (when acting as companies, however when acting as natural persons the principle of reciprocity applies)

According to the Law on the Policy of Foreign Direct Investment in Bosnia and Herzegovina, foreign equity ownership of business entity engaged in the production and sale of arms, ammunition, explosives for the military use, military equipment and media shall not exceed 49% of the equity in that business entity.

In case of investing in the above-mentioned sectors, foreign investor must obtain prior approval from the competent body of the respective Entity. The Entity Government may decide, if it deems justified, that the share of foreign entity for certain enterprises engaged in the production and sale of arms, ammunition, explosives for military use, military equipment is not subject to the above restriction.

Restrictions applicable to domestic investment on account of public policy (l’order public), public health and protection of the environment are equally applied to foreign investment.

There is no difference for company owners / taxpayers (only for natural persons, in accordance with the laws on real / property rights, the principle of reciprocity applies).

In Federation of BiH steps for establishing limited liability company (doo) and costs are as follows:

5.STEP - Opening a bank account in a commercial bank

6.STEP - Registration of the company and staff at the Tax Administration

7.STEP - The statement of the company founder about fulfilment of all requirements for starting activity (submit to the competent inspection department)

Duration and costs of establishing a business

According to the Law, the court registration procedure of establishing a business takes 5 days. And costs around 2500.00 BAM (KM)

STEP 1 - Verification of the founding act by a notary

STEP 3 - Registration request submit at the Intermediary Agency for IT and financial services - APIF (Agency is responsible for court registration, issuance of the tax and statistic number)

STEP 5 - Open a bank account in a commercial bank

Duration and cost of establishment of the company
The registration process with APIF takes 3 days. And costs around 500.00 BAM (KM)